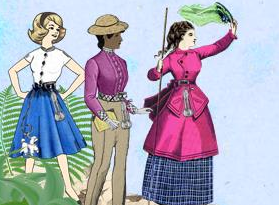 On the Verge (or The Geography of Yearning)
By Eric Overmyer
Sept. 22, 23, 29, & 30
1M; 3F
The year is 1888 when Mary, Fanny, and Alex, three women who are each intrepid world explorers in their own right, band together to conquer Terra Incognita, the last and most mysterious of unexplored territories. As they bushwhack their way through jungles, brave treacherous ice sheets, and negotiate passage across a bottomless Gorge, the ladies reminisce about their past adventures and sort out their personality differences. They encounter a chameleonic cannibal, an adorable young Yeti, and a Troll demanding a toll…. as well as a number of mysterious artifacts: egg beaters, dirigibles, political campaign buttons, and newspaper clippings from the 1900s… On this one-way journey through space and time, each lady discovers her own unique destiny in the beautiful, loud, and brightly lit future. Eric Overmyer’s On the Verge, or, The Geography of Yearning is a romping meditation on the outer and inner frontiers of the human condition, full of lyrical and hilarious dialogue and imagery both beautiful and surreal. It requires a sense of whimsy and a strong ensemble cast.

Dick Pix By Daniel McCoy
Oct. 27, 28, Nov. 3, 4
1M; 4 F; 1 Genderqueer
Dick Pix is a satirical comedy about artistic integrity, gender identity, sexual harassment, and narcissism in the age of social media. Calvin Lively is a photographer and self-proclaimed provocateur in desperate need of an idea for his next installation. Grace, his girlfriend and publicist, and Fin, his best friend and art dealer, are turning up the heat as the deadline approaches. Meanwhile, two eponymous Art Handlers complicate the situation when they become the target of Grace’s unwanted attention. Mrs. Marbleblatt, a widowed patron of the arts, further queers the equation when she takes a pruient interest in Calvin’s work. As the title suggests, Calvin’s installation involves large-scale photographic prints of his own penis selfies (tastefully framed). Though the show is a financial success, Calvin is unprepared for the sudden and unorthodox ways in which both Grace and Fin’s own internet stars rise as a result leaving Calvin feeling like an anachronism in a world where he’s used to being at the center. With the help of Mrs. Marbleblatt, Calvin has one last big idea that will cap off his body of work with a bang.

Civil By Rob Matsushita
Dec. 1, 2, 8, & 9
2M; 2W; 1 either M/F
“Civil” is a social satire set in an unspecified future, where trials are held in a virtual environment, and can only be 40 minutes long. Five actors play multiple roles, and the audience votes on the outcomes of both trials.   This show is meant to be performed with no set, no props, and minimal costumes. But productions are encouraged to go crazy with lights and sound.

Nexus By Danielle Mohlman
Feb. 9, 10, 16, & 17
1M; 1F
Metaphorically set in the Museum of Broken Relationships, this chamber drama follows two iPhone-armed DC transplants as they drift between intimacy and disconnect. The play opens with W and M – strangers – waiting for a bus. Their eyes wander and W is quick to mention that she has a boyfriend. But they’re on a break. Because he doesn’t want to call it a “relationship” anymore. M asks for her phone number, offering his much newer model as collateral. He enters his number and what follows are the moments that would be on display if they were a living exhibit in the Museum of Broken Relationships. Over the course of the play, M and W visit everywhere from Smithsonians to Metro stations to parks to each other’s apartments, but the real play lies in what is said and done at these locations. The play is set in the present in Washington, DC. Despite the multiple locations indicated in the script, this entire play takes place in the Museum of Broken Relationships in Zagreb, The only set piece is a museum bench.

Steve Got Raped By Sam Gooley
Mar. 23, 24, 30, & 31
2M; 2F
Newly engaged couple, Steve and Katie, think they have life figured out. They’re gliding through adulthood without any problems or complications. Until, Steve finds the smiley-face pregnancy test in their bathroom trashcan right before his bachelor party. After some discussion and a little foreplay, Katie convinces Steve to go to his party and encourages him to have fun. Everything goes according to plan until Steve wakes up the next day missing his pants and questioning his fidelity. Was Steve’s encounter with a surprise guest consensual or was it rape? What do you do when you’re stuck in the grey area of consent, monogamy, and societal expectations? Why do we treat each case of sexual violence the same when every case is so different? This is a story of our generation’s anxieties about sex, maturity, and settling; showcasing a generation standing on the precipice of adulthood and ignites in all of us the question: Am I ready for what comes next?

Poona the Fuckdog and Other Plays for Children By Jeff Goode
Apr. 27, 28, May 4, 5
Cast: 8 – 17 (depending on doubling)
Once upon a time there was a Fuck Dog. Named Poona. Poona was a very lonely Fuck Dog until one day she was visited by her Fairy God Phallus and taught how to play a fun game in her big pink box. Poona suddenly becomes a very popular Fuck Dog! Poona’s adventures take her to the Kingdom of Do (where nobody did) ruled by a powerful television set. She meets, among others, Suzy-Suzy Cyber Assassin, a thespian shrub, lost space aliens, and she even talks to God! Poona finally grows old and must tell her fabulous story to all you little kiddies.