“May I with right and conscience make this claim?” 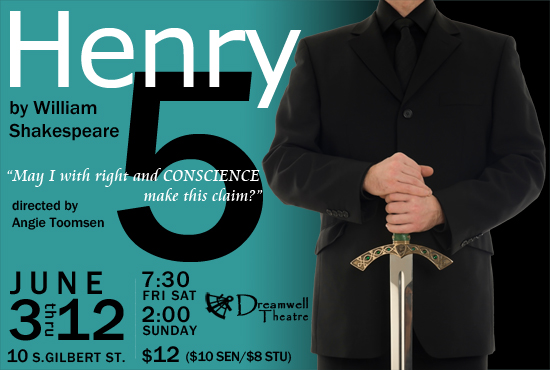 Dreamwell ventures into the “vasty fields of France” with a dynamic, intimately-staged, modern re-telling of the Bard’s most famous war play, Henry V. On the heels of Henry IV Parts I and II, Henry V marks the coming-of-age of one of England’s most famed kings, and his legendary defeat of the French at the battle of Agincourt.

Dreamwell chose to bring this very exhilarating, challenging—and often quite hilarious—piece to audiences as a part of its “Season of War and Consequences,” a program of plays exploring the multi-faceted experiences of war, from home front to front lines. Henry V is often strategically cut to present a celebration of glory and patriotism, but Dreamwell’s production examines a conflicted wartime king whose strengths and weakness are one-in-the-same.

“The piece is rich with ambiguity regarding war, power, conscience, rage, temperance, collateral damage and so on,” says director, Angie Toomsen. “The rousing speeches are what the play is known for, but Hal’s moments of conflict, doubt and passion-fueled missteps are far more compelling. Our cutting retains the interesting questions.”

“We wanted to create an inclusive and collaborative experience of Shakespeare to actors of varying backgrounds,” says Toomsen. “In that same spirit of community and accessibility, everyone involved has become a co-creator in the truest sense, mining the script for new interpretations and surprises. It’s been a blast.”

All in a Day Play Festival Participants