Auditions set for Death of a Salesman

Dreamwell Theatre will hold auditions for Death of a Salesman by Arthur Miller, directed by David Pierce. Auditions will be held at the Iowa Cit 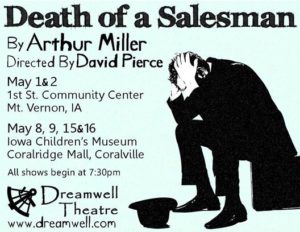 Productions will take place on the following dates:

Willy Loman (Male, 55-65)-A salesman broken down by years on the road and the weight of his own dreams.
Linda Loman (Female, 55-65)- Quietly strong, fully aware of who and what Willy is.
Biff Loman (Male, 30-35)- Willy’s oldest son and former golden child, ex-high school quarterback still in good shape physically.
Happy Loman (Male, 30-35)- Willy’s other son, forever overshadowed by Biff.
Charley (Male 55-65)- Willy’s next-door neighbor and successful business man.
Bernard (Male, 30-35)- Charley’s son, as a child looked up to Biff, now extremely successful.
Ben Loman (Male, 40-50)- Willy’s older brother he hasn’t seen in years, appears here as figment of Willy’s imagination.
The Woman (Female, 40-50)- Had an affair with Willy years ago, appears here as figment of Willy’s imagination.
Howard Wagner (Male, 30-40)- Willy’s boss, son of the man who originally hired Willy.
Stanley (Male, 25-35)- Waiter at the restaurant where Biff and Happy take Willy.
Miss Forsythe (Female, 25-35)- Refined, at the restaurant where Biff and Happy take Willy.
Letta (Female, 25-35)- Friend of Miss Forsythe.
Jenny (Female, 20-30)- Charley’s secretary. One scene, four lines, could be played by same actress as either Miss Forsythe or Letta.
Synopsis
Death of a Salesman revolves around the last days of Willy Loman, a failing salesman, who cannot understand how he failed to win success and happiness. Through a series of tragic soul-searching revelations of the life he has lived with his wife, his sons, and his business associates, we discover how his quest for the “American Dream” kept him blind to the people who truly loved him. A thrilling work of deep and revealing beauty that remains one of the most profound classic dramas of the American theatre.
Please email publicity@dreamwell.com with any questions.

Join us for our Murder Mystery Fundraiser

Auditions for Why Torture is Wrong