Auditions for The Trestle at Pope Lick Creek 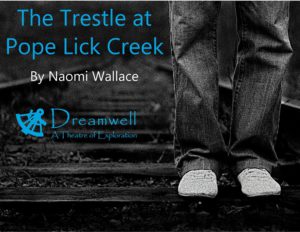 Synopsis: Dalton Chance is 15 years old and an open book. Pace Creagan, aged 17, is fearless and feared, and to Dalton, she’s irresistible. A poetic, Depression-era play by a prize-winning writer is a coming-of-age story with a wicked twist. The relationships between Dalton and his parents, Gin and Dray, are explored as well as the curious behavior of Chas, the jailor, with his own secret.  All roles examine the depths of how each character found themselves in their current situation and how they deal with it in this world where no bright future is apparent.
Roles:
Pace Creagan – 17 year old girl
Dalton Chance – 15 year old boy
Gin Chance – early forties, Dalton’s mother
Dray Chance – late forties – Dalton’s father
Chas Weaver – early fifties, male
Cast members under 18 years of age will need parental consent. All roles may be cast with people older than stated ages.
If you cannot make Saturday auditions, please contact the director, Chuck Dufano, with this or any questions at: chuck@dreamwell.com.

Auditions for The Homecoming