Dreamwell’s final production of the 2013-14 season is a hilarious comedy by Steven Dietz. The play centers on Becky, a middle-aged woman who’s happily married to her husband; but 28 years of wedded life has turned their marriage into a predictable routine. She meets a grieving widower who happens to be a millionaire. Although he mistakes her to be a fellow widow, she doesn’t let on with the truth, driving her to a crossroad point of her life. 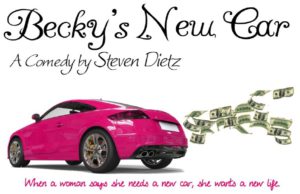 Becky Foster – (appears 45-55) — Charming, funny, attractive, and haunted by the feeling that her life isn’t what she had hoped it would be. Central to the ensemble and carries the show, including multiple interactive fourth wall breaking monologues.
Joe Foster – (appears 45-55)– Becky’s husband. Strong, pragmatic, stolid, loves his wife and family, and is significantly smarter than he gives himself credit for.
Walter Flood – (55-65) — very wealthy businessman. Gentle, sweet, good hearted, and not terribly connected to the real world. Has been lost since his wife’s death.Chris Foster – (appears 26) — Joe and Becky’s son. A goofy college psychology major.

Ginger – (40-55) Walter’s neighbor. Scion of a family that has just about gone through all of its long held family wealth. Sad, funny, smart.

Auditions will be at the Iowa City Public Library, Room B, 1 p.m. Saturday, March 8, and 6 p.m. Monday, March 10. Scripts will be on reserve at both the Iowa City and Coralville Public Libraries. Sides will be provided at auditions, including a portion of Becky’s opening monologue. Actresses considering the role of Becky are requested to prepare a comic monologue, though this is not required.

Production dates are May 9, 10, 16, and 17 at the Unitarian Universalist Society. Rehearsals are expected to begin by March 24. Please prepare a list of conflicts between March 16 and May 10. All cast must be available May 5-8 in addition to the performances. Rehearsals will primarily be M-Th evenings in Iowa City though some weekend afternoons may be needed dependent on cast availability. Questions should be sent to the director, Brian Tanner, at brian@dreamwell.com.

Auditions for Bob: A Life in Five Acts